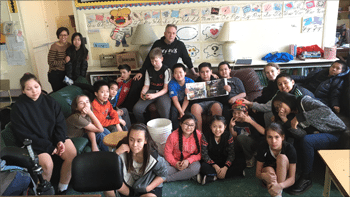 I like the fact that it is international woman’s day, I didn’t plan it that way, but it’s a perfect way to start this journey, being a woman and all. I’m sitting in Istanbul right now, after a 9 hour flight with no sleep and a crying baby next to me, waiting for my connection to Arusha and even though I can’t see straight I am absorbing the transition when the smells, cloths and people change and once again I realize that the world is a very big place.

I vacillate between thinking “what the hell am I doing???” and “This is the coolest project on the planet!” . I’ve been ready for over a week now with one foot out the door. I have an inverter, a projector, an extra phone, lots of hand sanitizer, a rugged drive, toilet paper, chocolate, crackers and peanut butter and lots and lots of little toys for the kids in the storytelling club in Iyoli. In fact, it might even look like I am opening a little store in Tanzania so I am super nervous about crossing customs.

The grade 6/7 class from Strathcona finished the pieces that I will be screening in Iyoli, Tanzania. They created a book that they are holding in the picture below, a song that St. James Music Academy choir performed, a series of interviews PLUS a short experimental “Day in the Life” piece done in virtual reality.

What I loved most about this project is getting to know the kids at Strathcona, an incredibly diverse school. They introduced themselves by talking about who is in their family. One kid has a mom and dad, another has 2 moms, another has no dad, one has no siblings related to them and another has 5 brothers and sisters. It’s so simple but powerful. In Iyoli the answers will be very different and create an even deeper level to this project. The project has also brought a lot of people together. Vancouver teacher Perry Buchan worked with kids at Strathcona school and helped them to write a song. My friend Meshe Mooette arranged it and created a score and gave it to choir director Jill Simycia at St.James Music Academy, a free after school music program on the downtown Eastside. Brent Cross recorded it and Doug Sherrett’s class made a music video. Jackline translated everything into Swahili. Trish transcribed some of the videos. It goes on and on.

I had some ideas about what I wanted to see when this project was conceived but nothing is as I imagined, it’s much better. I thought the kids would bring stories that were linear and traditional, that their parents told them as babies, but instead we got interview questions that they filmed, we got a song and they tool all the pictures which became a visual story seeing the school through their eyes.

I just finished watching a TED video about teaching young girls to be brave rather than perfect and I think that this is what this project is all about, a leap of faith and courage. I did plan everything but I’m going to let that become a guide rather than a way to measure success. Whatever happens, happens.

How to plan for a killer colour palette

A Brand Visual Ecosystem—here’s what goes into creating one

Lara has been an award winning web strategist and developer for over 15 years.
Linkedin Instagram